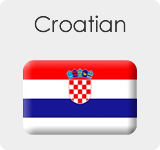 Croatia is a very small country in a shape of a bird when you look at it on the map. It is placed almost in the middle of continental Europe, right next to Italy.

Croatia has three parts – sea, mountains, and plains. The part where the sea is getting hot summers and it almost never snows during the winter. Mountains and plains have hot summers as well, but also plenty snow in the winter.

These three parts of Croatia each have a bit different culture and customs.

Croatian people have been living in Croatia for more than 1,400 years. They are people who are very proud of their heritage. Croatians love their history – Croatia used to be a kingdom with a hero-king and a brave army.