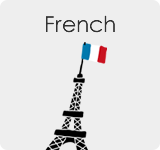 French is a Romance language spoken by about 265 million people in France, Belgium, Luxembourg, Canada, Switzerland, Italy, the United States, Lebanon, French Guiana, Africa, Madagascar, a number of islands in the Indian Ocean, Haiti and other Caribbean islands, Indochina, New Caledonia, the New Hebrides and the French Pacific Territories. The French language came from Latin and first appeared in writing in 842 A.D. The literacy rate is 99% throughout the country of France, with reading remaining as a favorite pastime of French youth today. French is the official language of the United Nations. It is the 2nd most commonly taught language in the world.

Within the country, there are many regional languages, yet French remains the national language. English is taught in schools as a second language. 34% of the French people speak English.