Jewish Culture and facts – Culture of Israel for kids 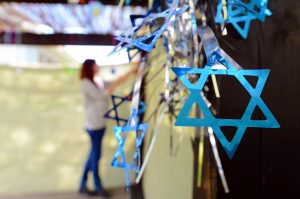 About the Jewish Culture

The flag of Israel was adopted in 1948.  It shows a blue Star of David on a white background between two horizontal blue stripes. Blue and white are the colors of Judah.  White stands for the holiness of the priesthood and blue stands for the beauty of the sky.

Judaism is the oldest of the world’s four largest religions that believe in one god.  It has 12 million followers around the world.  The Torah (Jewish Law) is the primary document of Judaism.  It was given to the Jews by the Prophet Moses (Moshe) about 3,300 years ago.  Major holidays include Rosh Hashanah and Yom Kippur, Pesach (Passover), Shavuot (Pentecost) and Sukkot (Tabernacles).

The State of Israel, an independent nation in southwest Asia, is located between the eastern shores of the Mediterranean Sea and the Red Sea. Israel became a country on May 14, 1948.  Israel is considered the Holy Land for Christians, Jews, and Muslims.

The official language of Israel is Hebrew. English is widely used as a second language, and recently Russian has become commonplace.

The largest Jewish communities are in Israel and the United States with major communities in France, Argentina, Russian, England, and Canada. There are about 13.5 million Jewish people in the world today.  The three most common languages spoken by Jewish people today are Hebrew, English, and Russian.  French and Spanish are widely used.

There are thousands of restaurants, casual eateries, cafés and bars in Israel, offering a wide range of choices in food and culinary styles. In addition to Middle Eastern specialties, there are restaurants offering a wide selection of ethnic food, including Italian, French, Greek, Russian, Ethiopian, Balkan, Thai, Chinese and American foods.