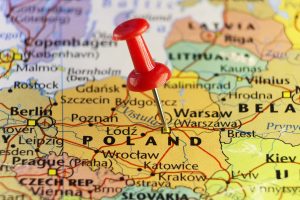 Poland is a country in Central Europe.  Poland is made of sixteen regions or voivodeships.  Warsaw is the capital of Poland.  Poland has a long history that has existed since the tenth century.  In 1795, Russia, Austria, and the Kingdom of Prussia divided up Poland and it was no longer a country.  In 1918, Poland officially became an independent country again.

Poland’s National Anthem is Polish composer Dąbrowski’s Mazurka.  This song is also known as “Poland Has Not Perished Yet”.  A white eagle wearing a crown is the national symbol of Poland.